Since 2005 the Bryden String Quartet has provided background music of the highest quality to their clients for weddings, events and product launches.

The Bryden String Quartet was formed in 2005 when a group of like-minded musicians began providing high quality background music for weddings and events.
The Quartet studied at the leading Music Conservatoires in the UK including the Royal Welsh College of Music and Drama and the Royal College of Music, London and have since gone on to carve professional performing careers for themselves within the classical and popular music world.
Members of the Bryden String Quartet have performed with many of the UKâ€™s leading musical ensembles, including the Royal Philharmonic Orchestra, Royal Philharmonic Concert Orchestra, Bournemouth Symphony Orchestra, Royal Opera House, Welsh National Opera, BBC Philharmonic Orchestra, the BBC National Orchestra of Wales and many more.
In demand commercially, the musicians have appeared with Kanye West, Goldfrapp, Susan Boyle, Katherine Jenkins, Russel Watson, Alfie Boe and Shirley Bassey; and have appeared in films including The Duchess, Sherlock Holmes: A Game of Shadows, Great Expectations and Brighton Rock. Television work for Bryden String Quartet musicians has included Strictly Come Dancing, the X Factor, the Alan Titchmarsh Show and the Brit Awards!
The Bryden String Quartet has also worked with recording studios and artists such as Thunder, Tyketto, Emma Blackery and Public Service Broadcasting, with whom they performed at the Royal Albert Hall.
Tweet

They were fantastic!! From the moment I booked them they were good to get in touch with, understood any changes I made to the initial booking, turned up on the time they said, were very polite, sounded absolutely amazing and just some great people to talk to. I would definitely book them again and I recommend everyone should check them out if they are organising their wedding or a big event. 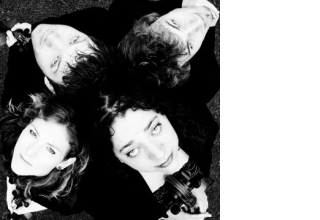