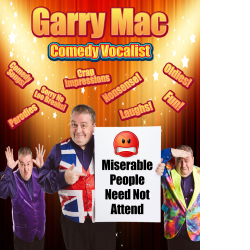 Garry is an all-round entertainer who can work as a comedy vocalist or a comedian. This very talented artist has won favour with audiences across Europe. He is also a very strong vocalist. Garry is a great entertainer who loves nothing better than to communicate with his audience and bring them along for a fun ride. 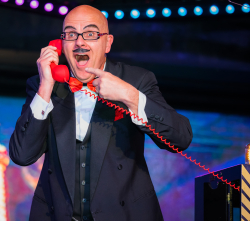 One of the most ingenious comedy speciality acts over the past 25 years comes, El Loco aka the dentist chair.

Your band, act, or business here?

Europa Clowns Matto and Polo are one of Europe's best known comedy acts and have made many television...

Jimmy Riddle is an English comedian, actor, impressionist and writer.

"AN OUTSTANDING AND ORIGINAL IMPRESSIONIST" THE STAGE

An established entertainment and events company committed to providing top quality productions throughout...

Comedy Venues Across The UK & Abroad Hire a Comedian or book a comedy night at your venue.

An hilarious tribute to the one and only, ‘Peter Kay’.

Zaz is a young, good looking Clown. Who loves to juggle, and ride unicyle's his fun packed shows...

I perform stand up comedy as myself and sometimes as my comedy alter ego Nob Stewart.

'The best in Magic & VENTERTAINMENT'. One of the top Vents in the UK

I am an award winning circus clown, I have performed in circus since 1993. Performed all over Europe...

Whether it be Corporate Hospitality, Sporting Functions, Company Events, Product Launches, or Hosting...

We specialise in comedy stilt and ground-based characters which combine high levels of skill and original...

Visit tonyparkins.com & peruse the services and products offered from this sought after personality

Book Grant Saunders one of the premiere stage hypnotists working today. from Theatres and cruise ships...

Peanut has been entertaining children for over twenty years as the Instant Circus Party Clown! Clown...

Surprise your guests with a unique act that has been keeping guests laughing all over the world.

The corporate favorite Chris James Mindreader unique entertainment for your event. After Dinner, or...

Our immaculate walkabout characters can be the icing on your event! With over 100 comic scenarios

25 years in the business of providing good clean Irish humour to audiences of all ages. Worldwide!

Forget on stage, forget 20 people or so. This is one on one street hpynotism. Anyone, anywhere!!!

A physical street theatre company, bringing mayhem with grace to your events. We delight and amuse our...

Stand-Up Comedy and entertainment at our own venues, or for your own events, conferences or parties.

The Real Deal Comedy Jam is coming to your city with the hottest urban comedy http://bit.ly/2wS0ikR

Atmospheric Entertainment offers roaming character actors in the theme of your choosing.

Drew Cameron Hove, The City of Brighton and Hove

Dave is Ibiza's No1 Comedy Stage Hypnotist during the months of May-Oct and available in UK during...

Spanner in the Works

South West based funny man with an energetic and engaging style suitable for all ages.

Fantastic walkabout acts, from MARTIANS ON STILTS, to GRANNIES ON SCOOTERS... also we have The Creatures...

The worlds of circus skills and theatre techniques are fused together to produce high quality, character-based,...