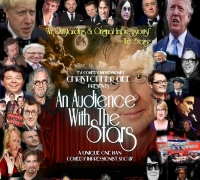 "AN OUTSTANDING AND ORIGINAL IMPRESSIONIST" THE STAGE "CHRISTOPHER GEE IS DOPE. CAST THIS DUDE!" AD I SHANKAR - FAMOUS HOLLYWOOD PRODUCER

"WHY BOOK ONE STAR...WHEN YOU CAN HAVE A 100"
Book Christopher Gee's' AN AUDIENCE WITH THE STARS" Unique One Man Stand Up Comedy Impression Show.

This unbelievable Comedy Impression Show has played to 1000 's of people both on Land and at Sea, and is suitable for Cruise Ships, Hotels, Theatres, Social Clubs, Holiday Centres etc.

WHO IS IN THE "AN AUDIENCE WITH THE STARS SHOW"?

Expect to see these Stars Over two Shows, tailored to the Audience Demographic.

I want to thank you Christopher for a great night! The feedback from my membership has been overwhelming. We all loved how brilliantly you worked the audience right into the show without any insults or vulgarity and still had them laughing in their seats. You gave us more than we could ever ask for, with great jokes, stories, and your impressions was spot on. I know that our membership is very different from a typical comedy club audience us being Ex forces but that didnâ€™t matter to you one bit. you were right there and ready and reacted quickly to make us laugh over and over. You were a pleasure to deal with and I look forward to our next meeting in the future. kind regards Spud Murphy Devonshire and Dorset old Comrades Forum. 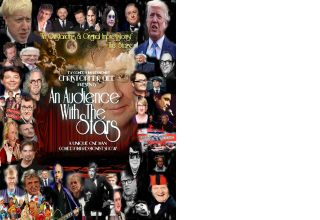