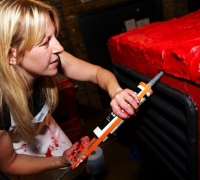 Based in Brighton I have a fully functioning workshop.
I take on all manner of commissions from bespoke jewellery, taxidermy stags to large set builds. I have over 20 years experience working within the entertainment industry. Previous clients include:Royal Opera house,Glyndebourne,Shakespears globe, Marawa the amazing, Beaulieu Motor Museum,
I am a professional Artist, designer/Fabricator. I recently completed a Â£10k 9ft Bonsai tree Sculpture for Beaulieu's Jonathan and Nathalie Montagues wedding. The sculpture is permanently located at Beaulieu's Motor museums garden.

I have over 19 years as a Designer/ maker, special effects technician/Prop maker/Model maker for Theatre, films and Television and the Arts....

I have worked for SFX and Prop/making companies and various Film studios; Pinewood, Shepperton as well as theatres such as The Royal opera house, Glyndebourne Opera house, Theatre Royal Brighton and The Royal Albert Hall. I have completed private commissions for Beaulieu, The Tussauds Group, The British council and Shakespeare's Globe. Other Projects have been working for Neil Corbould sfx. at Pinewood. The Skoda Fabia cake car for which I was involved in the making and fabrication of and I appear in the advert.
I made the Costume and effects worn by Susan Bullock for the Last Night of The Proms.
http://www.youtube.com/watch?v=QiH75Ruz74I
In 2013 I completed filming for the channel five series Beat the ancestors for Dragonfly tv.
As part of a team of engineers responding to Dick Strawbridge's challenges we were to rebuild iconic inventions that changed history: from siege engines to gunpowder mills, early automobiles to invasion crafts.
Please check out my website and get in touch.
www.claregrotefeld.co.uk
I have recently completed the position of Props supervisor for Pinot Productions for St James theatre Sideways.