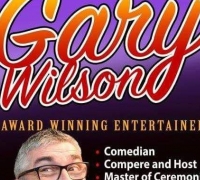 One of Northern Irelands busiest comedians, hosts and comperes Gary Wilson is admired for his professionalism in any situation, Gary has a vast repertoire of material to suit any occasion or audience and was honoured to be invited to perform for HRH Prince Charles The Prince of Wales at a private and exclusive evening at Hillsborough Castle.

Topical and current are just two words used to describe his comedy stories about life, love, money, death and anything else that can raise a laugh â€“ and all in a laid back, much loved traditional Irish comedian style.
Gary prides himself on good honest clean material â€“ maybe a little saucy but never blue â€“ something that is getting harder to find in the comedy circuit!
Having performed in nearly every provincial theatre in Northern Ireland, as well as The Waterfront Hall and Ulster Hall in Belfast, Gary has worked with some of the leading showbiz names during his career including Jimmy Cricket, Roy Walker, Charlie Lansborough, The Alexander Brothers and Charlie Lawson to name just a few. Gary also performs across ROI, Blackpool, Scotland and Spain.
Other venues include hotels, village halls, churches, wedding receptions and open-air events. With audience from 20 â€“ 3000 â€“ he will be sure get them laughing!
Gary has also been tasked to host and compere events that have been attended by the First Minister of NI, The Taoiseach of the Republic of Ireland, The American Consul, representatives of Royalty and numerous other leading figures from around the world.
Gary also includes some comedy magic and ventriloquism in his act â€“ great for getting some audience participation. And Gary loves to sing so you will get a few original comedy songs in his repertoire.
And if you are brave enough Garyâ€™s alter ego Ms Peggy Oâ€™Dee ( best described as Mrs Brown and Dame Edna in the one frock !) will have any audience glued to their seats as he shares some hilarious anecdotes and stories.
A great people person Gary likes nothing better than going the extra mile and meeting his audience off stage for a chat!
Hilarious, Adaptable, Professional, Talented, Funny and Reliable â€“ are just some words that have been used to describe Gary over the years.
Gary is available for any of the afore-mentioned duties or services - Distance no object!
www.garywilsonentertainer.com 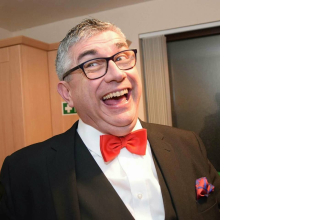