The craziest, zaniest DJ in the world….. probably!

The craziest, zaniest DJ in the world….. probably!

Stuart Lake a.k.a. DJ Disco Stu has been a DJ for over 15 years having worked in such glamorous places as Ibiza, Majorca, Menorca, Tenerife, Lanzarote, Fuertueventura, Corfu, Costa del Sol & Scarborough!

Either as a DJ or compere for your event DJ Disco Stu can bring something different to your event/venue. Playing the soundtrack to your life with his policy of you request them and he plays them! Stuart is a human jukebox playing the best in feel good party music including those songs you might want to forget, Remember Orville? Stuart does!!!

Stuart is not just a DJ, he is the ultimate party DJ with his quick wit and an array of props he not only plays music but entertains the crowd, yes you guessed it Stuart knows how to use the microphone! It has been known for him to turn up to a venue in a full Elvis jump suit!

Also a talented presenter, he has worked across the UK and Europe, with national companies Brannigans, Chicago Rock Cafe, Bourne leisure’s Haven Holidays and in numerous venues across Europe as DJ/Presenter and entertainments manager. Stuart has worked as a Presenter on national tours for Alexander O’Neal, Big Brothers, Caprice, Go West, Howard Jones, Jason Donovan and of course Chas ‘n’ Dave.

Looking for something different, why not try me?
Tweet 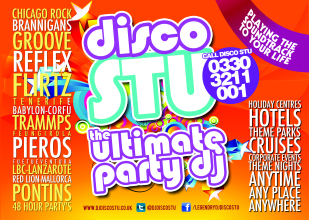