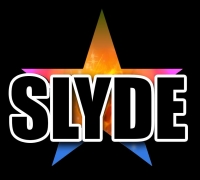 The band is dedicated to promoting the authentic sound of the 1970’s Glamrock era, which heralded the arrival of a flamboyant trend in popular music.

During the mid-1970’s rock musicians began to compete with each other, not just with their sound alone, but mainly by developing more and more eccentric ways of capturing the attention of their audiences.

Appearing as Glamrock UK they pay homage to the bands of that era and include many classic hit songs in their repertoire. Songs such as:

Their Festive Hits include:

I wish it could be Christmas Every day Lonely this Christmas
Santa Claus is coming to town.

PLUS – Their own Christmas song – “I Can’t Wait for Christmas.” Initially released on November 18th 2013, available on I Tunes and Amazon.

(The No1 Slade tribute band in the UK and in Europe)

Slyde are a 4 piece Slade Tribute band from Buckinghamshire (UK) who pay homage to the mighty British rock institution that is SLADE, and faithfully replicate the bawdy sing-along tunes, the glam and glitter excess, and the raw rock 'n' roll power that was SLADE during their early seventies heyday!

A Slyde set is also a glitter strewn journey of seventies anthems to stomp a sparkling platform boot to. There is a plethora of rump shaking glam classics and bell bottomed gems spilling from the brim of a mirror festooned top hat !

Front-man Nobby Boulder is one of only a few rock vocalists in the UK who have the power and vocal range to sustain a performance of well over an hours’ worth of 70’s rock classics from the mighty Slade. Of course there can only ever be one Noddy Holder, but Nobby pays an impressive tribute to the man and his music.

And of course one of the most popular songs played at Christmas time each year, but also performed by popular demand
Tweet