Live Nation have today confirmed dates for the European leg of U2’s upcoming eXPERIENCE + iNNOCENCE Tour. Kicking off in Tulsa, Oklahoma on 2nd May, the European tour will begin in Berlin on 31st August for a string of European dates to include Cologne, Paris, Madrid, Copenhagen, Hamburg, Amsterdam and Milan, as well as Manchester on 19th October and London on 23rd October. (Full itinerary below. Tickets on sale 26th January). 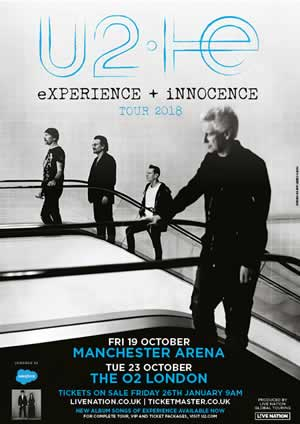 In addition, special home shows are being planned for Dublin and Belfast, details of which will be announced as soon as they are finalised.

Tickets for the U2 eXPERIENCE + iNNOCENCE European Tour will go on sale beginning Friday 26th January and there will be a public ticket limit of 4 tickets per person. U2.com subscribers will have the first opportunity to purchase tickets beginning Thursday 18th January at 10:00 am and running through Saturday 20th January at 5:00 pm.

Additionally, fans who pre-ordered Songs of Experience with participating retailers prior to 30th November 2017 are also eligible for a pre-sale opportunity for shows in the UK, Germany, France Spain, Portugal, Denmark, Italy, Ireland and Holland. Eligible fans will receive a unique code allowing access for a limited presale opportunity beginning Monday 22nd January at 9am through Wednesday 24th January at 5pm subject to availability while supplies last and limited to 2 tickets per person. *Please note, a code does not guarantee a ticket.

The tour will also visit Dublin and Belfast. Dates, venue and on-sale details to be announced soon.