THE SHOW WITH THE WOW FACTOR - Megaslam Wrestling, established in 2009 bring their family entertainment shows to Theatres and Holiday Parks across the UK!

Since being established, Megaslam Wrestling have presented more than 1,000 family entertainment events at a wide range of venues across the British Isles. From humble beginnings, Brad Taylor first threw his hat into the promotional ring with a small show in Rotherham, South Yorkshire, attracting 50 paying customers. Fast forward to 2016 and Megaslam Wrestling regularly appear in some of the most established Theatres and Halls in the United Kingdom, as well as premier Holiday Resort shows. Megaslam first got the call to provide their unique show for Thornwick Bay Holiday Village in Flamborough, East Yorkshire in 2011, working with the Flamborough Holidays group. Now, Megaslam are widely regarded as the number 1 go to company for Holiday Parks and Corporate entertainment bookers, boasting an impressive range of companies they have worked with. Megaslam Wrestling tour the British Isles each year and have been credited with bringing Wrestling back to a number of historic venues such as The Spa Bridlington in East Yorkshire, where action can still be seen on Monday's during the school holidays and weekly during the main summer season, the Blackpool Tower, Newcastle City Hall, Leeds Town Hall to name just a few.

The company presents more than 200 live events per year, with that number rising each year. In terms of in-ring talent, Megaslam Wrestling feature the cream of the crop in regards to British Wrestling talent, with regular appearances from the likes of El Ligero, Manchester rascal Bubblegum, Megaslam British Champion, CJ Banks, Robbie Mckenzie, North East ace Saxon and Blackpool's Sam Gradwell, who have both been chosen to compete in Stateside organisation, WWE's UK Tournament to be held in 2017, Martin Kirby and many, many more. Megaslam Wrestling also feature Ladies action prominently on their shows with the top women's stars making appearances in towns across the UK.
'Our ethos is simple, when we bring a show to town, we aim to create amazing memories for the families attending. We do this by bringing top stars to town in a family entertainment environment'

As well as the cream of the British crop, Megaslam shows also feature stars from Abroad, with talent appearing from the USA, Mexico, Holland, France, as well as familiar names from worldwide TV screens.

Megaslam are now in their 8th year of presentations and are ready to entertain thousands once again, whether you are a returning fan or attending our events for the first time, we cannot wait to entertain you like only we can, thus making Megaslam Wrestling, 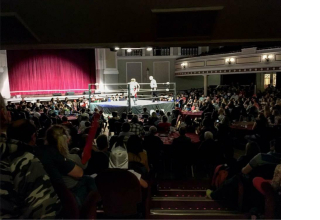