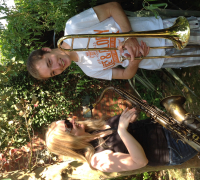 InJoQ - the essence of 60's jazz and 70's jazz funk ; great music from the likes of Horace Silver, Miles, Crusaders . Mixing experience with youth guarantees a new twist to classic tunes ; horns are the youth - the rhythm section played it the first time around !
Outstanding young trombonist Tony Lovell wows audiences with his phenomenal technique, and alongside him, multi- instrumentalist Nikki Hannent playing reeds and flute .
On upright electric bass and bass guitar Andy Jackson glues that groove along with Mark Crooks on drums .
Guitarist, leader and arranger Joe is the catalyst at the core of the band .

Tony trombone
- an exceptional, driving player with an understanding of upbeat jazz that belies his age . A full time musician / teacher he studied jazz performance at the Royal Welsh College of Music & Drama, going on to play with many and varied styles of bands, including Afro Cuban at the Brecon Jazz Festival with Leeds' pianist, James Clark's "Lonely Hearts Rugby Clwb" . With 4 Royal Albert Hall performances to date, he's no stranger to the bigger stage .

Nikki saxes & flute
- another highly gifted player, especially on alto , who also plays and teaches full time . A classically trained musician , Nikki's first foray into the gig world of jazz was with Joe back in 2010 and she has been growing with the band ever since . Also no stranger to the international stage or big venues, including "The Albert ", she is equally at home at intimate club gigs .

Joe guitar
- has played professionally since the age of 18 , with the Eric Delaney band and then diverse groups and big bands . Jazz wise has played alongside many top musicians including Don Rendell, Kenny Wheeler, Dick Morrissey and Bill LeSage .

Andy bass
- mixes music with being an architect and is no stranger to the jazz world having played with various jazz ensembles since his days in the Exeter University Orch and the Devon Youth Jazz Orch. Moving to London in1980, he played regular stints at The Dolphin Brasserie, Russell Hotel Jazz Brunch, most of the Park Lane Hotels and several Oxford University May Balls . Has played jazz with, amongst others, Brian Priestley, Nigel Barr, Mark Bassey and Roland Perrin .

Mark drums
- is the baby of the band and it’s newest recruit . He is already much in demand for both large and small bands, no doubt due to his easy swing but rigid time keeping.

The band is now seeking further gigs and concerts across the UK and mainland Europe.
indianjoe@live.co.uk
www.soundcloud.com/indianjoequintet