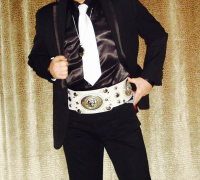 Endorsed by The Presleys themselves, Dean Craig is probably the best ELVIS you will ever experience. The stage presence, mannerisms and the voice are simply amazing !!

Dean has been an Elvis fan since he was about 6 years old. He loves to sing and record all types of music but Elvis being his first choice every time. He appeared in the brilliant Big Jim White Elvis musical 'Forever Elvis' (approx 1992) which toured England. He has appeared on local and national TV, Radio, Sky, Cable, CNN, GMTV, Yorkshire T.V. but this Elvis Musical was really the start of his singing career which has earned him the solid fan base he has today.

Dean is a professional entertainer, both confident and engaging, exploiting his positive personality traits and experience within the music and entertainment industry to engage people for a variety of different performances and venues. Interacting directly with the crowd in huge indoor and outdoor events, he has delighted audiences up to 20,000 Elvis fans.

Dean Craig has again been demonstrating the versatility of his talents
As the Global Walmart Associates Talent Search Panels Winner's Choice of 2015.
This competition has 1000s of worldwide entries, and the standard was exceptionally high across all genres of music. As the Winner, Dean was flown to Arkansas in the USA to perform in front of 1000s of colleagues & shareholders in the massive Bud Walton arena, University of Arkansas, Bentonville.
In America for a week, Dean performed on multiple occasions to the sheer delight of all the crowds, drawing massive audiences each time.
His professionalism shone through on each occasion particularly when there were technical hitches with the music and he sang Are you lonesome Tonight? & Viva Las Vegas acapella, to maintain the momentum and ensure the crowds were not disappointed with the delay.
The crowds certainly were not, and to screams and whistles of delight and pleasure, Dean kept the show ‘rolling’.
The crowds could not believe the ‘transformation’ from Dean Craig to Elvis Presley, and were astounded at just how close Dean’s voice was to the ‘King’.

Andy Clarke, CEO of Asda, told Dean that he could not believe the transformation, and what a truly amazing voice he had.
Dean was thrilled to learn he was sharing the stage at the ‘shareholders Meeting’ not only with other winners but with some real superstars , Reece Witherspoon hosting and with Brian Mcknight, Ricky Martin, Mariah Carey, & Rod Stewart performing, it was a bonafide ‘Star- studded Occasion of which Reese Witherspoon bragged " Oh my god.....I just met that british Elvis dude....phwoar!!".....

He has performed for the Military in Germany, Elvis in the Gardens twice in New Zealand, Hawaii for Xerox, Ireland and the USA, where he befriended The Presleys themselves ! Jerry Presley said of Dean, "Elvis would be blown away man".

He just LOVES to perform and is all about the performance and pleasing the crowd and as Elvis said "If you leave them wanting more, you've done a good job"......Dean Craig does just that every time !

Find Dean on Soundcloud too....DEANCRAIGELVIS. The next best thin
Tweet