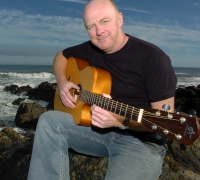 I've been singing and playing guitar in public for around 30 years now, mostly in pubs and folk clubs around Scotland, including a few folk festivals. I have been on two short tours to Chicago playing small venues and also a tour to Denmark in recent years.
Originally from Larne in Northern Ireland, where I was influenced by the music of Planxty, Christy Moore and Paul Brady and Van Morrison.
After moving to Aberdeen, Scotland in 1983, I became aware of the great maritime songs from the late Stan Rogers from Canada, which are a big addition to my repertoire.
In recent years I have become very interested in American Country and Blues, particularly the relatively new genre of Americana. Big influences for, both their songs and writing, are John Prine, Guy Clark, James Taylor and Jackson Browne.

My live repertoire changes greatly, depending on the audience and venue, from rowdy pub songs, (where I pride myself in getting a crowd singing and joining in), to intimate small concert venues and settings, where I love having the chance to perform my own songs and the quieter gems from my heroes mentioned above.

I am currently spending a lot of time writing and recording a new album which I hope to have available soon.

I remember someone almost clipping my ear recently for describing myself as 'just a pub singer' Almost every performer that ever made the charts, started in pubs!