Eimear is an electric and acoustic violinist from Belfast, Northern Ireland. With over 15 years of live playing experience, she has entertained as a soloist worldwide.

Ã‰imear started playing the violin at the age of seven in her native Belfast.
After completing her music degree, she moved to the North West of England to develop her career both as a secondary school music teacher and as a performer/writer.
In February 2013 Eimear toured Holland with amazing vocalist, Peter Corry, in his Irish dance and music show, 'Celtic Rhythms'. She was the violinist and lead singer of 'Red is the Rose'. She also provided backing vocals for Peter's songs.

Eimear was the original lead fiddle player/violinist and musician in the critically acclaimed show 'Essence of Ireland'. She toured the UK theatres for 3 years with the show and was mentioned frequently in the rave reviews for her energetic performances.

Ã‰imear has performed many times alongside top tenor, Martin Toal, which has lead to performances for Honda in the Isle of Man, Budapest, London, Wales & Northern Ireland.

Ã‰imear was the fiddle player and backing vocalist with top folk/country band 'The Bogtrotters' for 4 years and was also in Adrian Edmondson's (The Young Ones/ Bottom) band, 'The Bad Shepherds' for a short period of time.
These opportunities led to performances throughout the UK, as well as Germany, St. Lucia and Holland.
As well as credited session work on films, including the soundtrack to the Bob The Builder movie, 'Built To Be Wild', Ã‰imear made an appearance playing the fiddle in Demi Moore's supernatural thriller, 'Half Light'.
Eimear was a semi-finalist in The UK Songwriting Competition for her song, 'Tommy'. Aside from playing the violin and singing, she enjoys playing the guitar, piano and whistle on her compositions.
Eimear has her own wedding music business and regularly performs at ceremonies, drinks receptions and during wedding meals. She provides table to table entertainment after wedding meals also, enhancing the atmosphere with her fun renditions of well known popular pieces. She plays a unique silver-blue Bridge Aquila electric violin.
Tweet

I have worked with Eimear many times at major events in London and she has been outstanding both in a solo capacity and as an accompanist. She is very versatile and totally professional. The audiences loved her music and her personality which shone through in her playing.I would recommend to anyone. 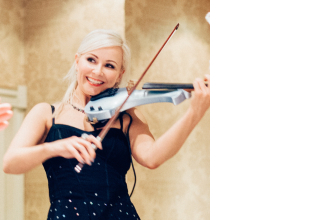