The UK Bhangra industry is a male dominating music entertainment field which has excelled hugely since the 1980â€™s. But one group that has excited crowds from the UK and abroad is a FEMALE only Entertainments Team, called Eternal Taal.

Managed and founded by award winning â€˜Parv Kaurâ€™ has not only set standards in the UK Bhangra Industry but also has broken through the non-Asian industry performing to wider audiences promoting and educating people of Bhangra music.

Parv Kaur, a young female from the West Midlands has had music flowing through her blood from a very young age. When her dreams became her passion and that passion became reality, Parv soon realised that her life is going to be dedicated to music. With the support from her family and friends Parv Kaur stepped out from the male dominating industry and embarked on a 13 year musical journey.

In 1999, Parv started her own Bhangra drumming classes called Eternal Taal meaning Everlasting Beats. Students all over the midlands joined and soon enough with hard work, weekly classes and a committed group, Eternal Taal started to perform for their local community events across the UK. Parv Kaur teaches many young talented students the history, background and nature of Bhangra music. These classes take place on a weekly basis and students who show great ambition and passion perform at many high profile events.

Parv Kaurâ€™s work has been recognised globally and in 2010 she was awarded the â€˜Contribution of Bhangra music in the UKâ€™ award from the House of Commons and nominated for the â€˜Young Entrepreneur of the yearâ€™ by the Institute of Asian Businesses (IAB) and â€˜Best in Arts and Cultureâ€™ by the Asian Women in Achievements and the British Indian Awards.

There was such a high demand for female drummers in different culture events, Parv wanted to expand her knowledge wider in which she set up her Bhangra Dancing Female group and Female DJâ€™s in 2008. The first group in the UK to be taught by a female drummer now consists over 40 dancers and drummers. Dhol playing is a very male dominated instrument but Parvâ€™s dream and passion became reality in which she now has established in the Asian industry as well as the non Asian industry.
Tweet 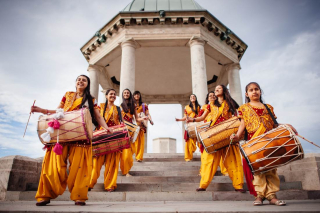