Doug Segal is an exciting entertainer combining comedy with amazing feats of mind reading and mind control. Described by Time Out as “the UK’s best kept entertainment secret” Doug was the winner of Best Cabaret Act at the Brighton Fringe in 2012, and the Three Weeks Editor’s Award at the Edinburgh Festival Fringe also in 2012.

Doug has appeared on BBC One’s New Year’s Eve live show alongside Natasha Kaplinsky and Claire Balding which was seen by an audience of 9.5 million viewers. He has also predicted the results of the 2012 Olympics on BBC Scotland and was a regular guest on Holland’s highest rated chat show 'Jensen!' on RTL5. Doug’s radio credits include 'The Comedy Club' (BBC Radio 4 Extra) and 'MacAulay & Co' (BBC Radio Scotland).

As well as appearing at the Edinburgh Festival Fringe, Brighton Fringe, Dave’s Leicester Comedy Festival and Glasgow International Comedy Festival, in 2014 Doug enjoyed a successful tour of the UK with his critically-acclaimed show, I Can Make You A Mentalist.

A performance of Doug's award-winning show, 'How To Read Minds & Influence People', promises to make the audience into mind readers as Doug teaches the audience how to predict the national lottery, detect lies and implant subliminal suggestions. There's nothing psychic or spooky . Everything is achieved using one or more of the following skills from Doug's background in psychology & advertising: persuasion techniques, statistics, reading body language, subliminal influence and two key advertising skills, cheating & lying!

Doug is also available for 'mix and mingle' for any size of event. He can also perform a unique and tailored parlour show for smaller audiences/groups. 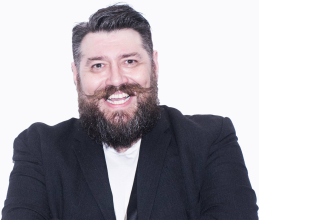