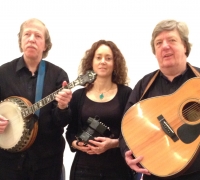 Wraggle Taggle are a professional, award-winning and talented traditional music band. Duo to 6 -piece. With or without a caller. Amplified or acoustic.

Wraggle Taggle are an award winning band of fun traditional musicians. We've performed for Mick Jagger, Robert Smith of the Cure, Princess Beatrice, Princess Eugenie and Frank Skinner to name a few. The band provide quality wedding reception and corporate entertainment and can tailor a band to your particular needs - anything from a duo to a six-piece, amplified or acoustic, with or without a caller. All the musicians have been performing, touring and recording many years.
Wraggle Taggle specialize in Traditional Irish, Scottish, American and English music, songs and tunes. They play with innovation, flair and vitality. Musical influences include; The Chieftains; Planxty; The Bothy Band; Altan; Ally Bain; Boys of the Lough; Jimmy Shand; The Pogues; Van Morrison; The Dubliners, Christy Moore and the many talented friends they have met over the years in the vibrant traditional music scene
The band are both sensitive to the occasion and responsive to the mood of the audience. If you wish Wraggle Taggle can concentrate on one particular style e.g. Scottish or Irish throughout the performance.
Award winning musicians Carlene Anglim (fiddle), Eugene Teevan (accordion), and Mick O'Connor (tenor banjo) are joined by Mick Bailey (guitar/vocals) to form the "core" of the band. Other instruments such as, flute, tin-whistle, or percussion may also be added. Speciality instruments such as Scottish or Irish bagpipes, bodhran (Irish drum) or traditional dancers are also available by arrangement (subject to availability & musical considerations).
The Wraggle Taggles' most common format for a ceilidh consists of four musicians plus a caller who will teach the dances from scratch - no experience needed! A ceilidh is something really different and ideal for a successful party, as it is a fun way to get families, friends and colleagues to mix and meet and because all age groups become involved.
Clients include Mick Jagger and Jerry Hall, Robert Smith of The Cure, Guy Ritchie, Jackie Clune
The Baroness McDonagh and Sheila McDonagh MP, National Theatre and British Airways.
Celebrities we've performed for include: Princess Beatrice, Princess Eugenie, Frank Skinner, Clive Anderson, Ian Hislop
Stephen Fry, Alan Davis, Dara O'Briain, Sanjeev Bhaskhar, Meera Syal, Aimi MacDonald, Bert Weedon
Venues include Return to Camden Town Festival, London NW1, Blenheim Palace, The National Liberal Club
The Royal Festival Hall, Pinewood Studios, and HM Treasury
TV appearances "Next" on Live TV, "Feilte" on TG4
Film appearances "66" with Helena Bonham Carter and Catherine Tate
Resident Musicians Clayton Crown Hotel, London NW2
Tweet

"Such wonderful musicians" "Hello Mick and all of the band who attended our wedding at Moreteyne Manor on 09/09/2017! (Saturday Woburn Road, Marston Moreteyne, Bedford, Bedfordshire, MK43 0NQ) What an absolutely fantastic interlude of music you gave us - we all absolutely loved it! I'm just so sorry I didn't get the chance to come and thank you personally on the day, it was a bit of a whirlwind - but I have the most beautifully vivid memories of dancing with my uncle in the lounge. Such wonderful musicians and you played a perfect array of songs for us all to enjoy. Paul heard the sea shanty and was very excited, especially when I told him that it was for him. We hope everything went ok for ye too and that you enjoyed the venue. We have had lots of people asking about you so we will be sure to pass on your name and website to them. Thanks for adding a wonderful dose of celtic magic to our special day. Lots of best wishes" Karen and Paul Savage 28th Sept 2017