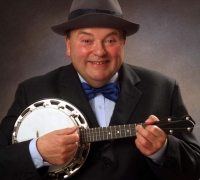 Derek pays tribute to the great entertainer George Formby singing many of his popular songs and other singalong medleys playing ukulele banjo and includes some comedy.

A trained actor, Derek is also a musician,singer, entertainer and after dinner speaker
He has performed in musical theatre and variety shows many times, moving on to
produce and direct musical, variety shows and 40’s reviews raising money for charity.
Live musical theatre experience includes leading roles in “Guys &
Dolls”, “Carousel”, “The Merry Widow” and “Fiddler on the Roof”.

Derek pays tribute to the great entertainer George Formby singing many of his popular songs and other well-known singalong favourite medleys from the 20s-late 40s eras playing ukulele banjo in the unique George Formby style.
He enjoys engaging with his audience with some comedy encouraging them to sing along.
Clients can learn more about George Formby when they book the Life Talk which still includes George Formby songs and comedy.

Yet another part of Derek's portfolio is when he brings the great comic Tommy Cooper back to life with his interesting and amusing LIFE TALK which includes many Tommy Cooper – style jokes and Tommy Cooper-style magic tricks!
Tweet