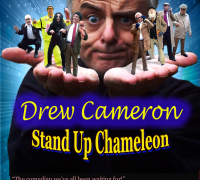 Ask anyone and they will tell you that Drew Cameron is two-faced.
In fact he's three faced and four and fiveâ€¦â€¦..well, over 70 in fact!

The A â€“ Z of impressions. From Ali G to Zippy. Michael McInTYRE to Alan CARr.
Combining fresh stand-up comedy with celebrity impressions such as Keith Lemon, Del Boy, Homer Simpson, to name a few.

If your looking to book an original and versatile impressionist, Drew Cameron is suitable for all types of events, from corporate promotions, voice over work, comedy clubs and theme nights through to private events.

As well as live comedy events, you may have also seen his impressions on TV shows such as Britain's Got Talent, the Frank Skinner Show, or possibly Dead Ringers â€“and if that's not enough to impress youâ€¦ you might have seen him in the Cheerios advert!

In June 2014, Drew was performing his impressions on Eggheads where he also beat Judith, one of the Eggheads, on the head to head round!!

Through 2014, Drew has been Joe Longthorne's support act on his theatre tours, where he often receives a standing ovation!

WARNING!!
Watching Drew Cameron can seriously damage your health.
A woman literally died laughing at one of his shows. It was an honour for him to be asked to perform two weeks later at her wake!

Check out his apps for the iphone http://appstore.com/celebemessageslimited

â€œAbsolutely Mind boggling performance! Must be seen (and heard) to be believedâ€ â€“ Time Out magazine.
Voted 'Best New Comedian' On ITV,
â€œGreat confidence, script and impressions. You are the Stand Up we've been waiting for!â€ â€“ Piers Morgan. (Britain's Got Talent 2008). 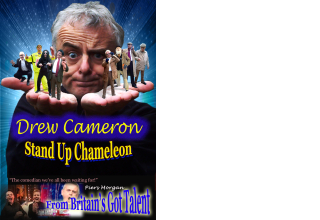