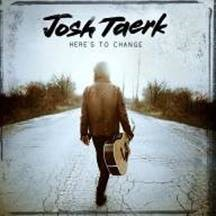 Canadian singer-songwriter Josh Taerk returns with his second album â€˜Hereâ€™s To Changeâ€™. Recorded over a few months in Nashville with producer and lead guitarist Teddy Morgan (Kevin Costner & Modern West) - to whom he was introduced by Rock-â€˜nâ€™-Roll-Hall-of-Famerand friend John Oates - Josh was able to soak up the creative atmosphere of â€˜Music Cityâ€™ and make the album he has always dreamed of.

Josh wanted to make an evocative album in tune with 70s and 80s rock music and the artists that have inspired him to play and write music - Bruce Springsteen, Tom Petty, Neil Young â€“ whose influences are implicative with a vision of producing an album in a studio with a band and playing those songs live. Josh explains, â€œI wanted the feel of the record, the tempo, the rhythm, the starts and stops in each song to feel more alive, I wanted a more human sound.â€

The record also includes guest vocals from John Oates on the title track â€˜Hereâ€™s To Changeâ€™ and song â€˜Wise Manâ€™. Oates was excited to be involved, "I've enjoyed getting to know Josh Taerk and his music over the last few years and knew that

Josh may only be 24 but he is already able to look back on many successes. His debut 2013 album â€˜Joshâ€™, for which he was commended for his intelligent and poignant song writing, showcased a maturity beyond his years. On the live scene he toured through Canada, the US and the UK, reached the semi-finals of Indie Week Canada, built a worldwide fan base and impressed industry peers like John Oates and fellow Rock-â€˜nâ€™-Roll-Hall-of-Famer Max Weinberg (Bruce Springsteen & The E Street Band) â€“ whom he supported in New Jersey.

â€˜Hereâ€™s To Changeâ€™ marks a huge development in the creative process for Josh, taking a more traditional Rock â€™nâ€™ Roll approach and adding his own modern twists â€“ the outcome is something he is enormously proud of. Josh exclaims, â€˜I am so excited for people to hear this!â€™

Take A Chance With Me

Waiting For The Flood

This Life Is Yours