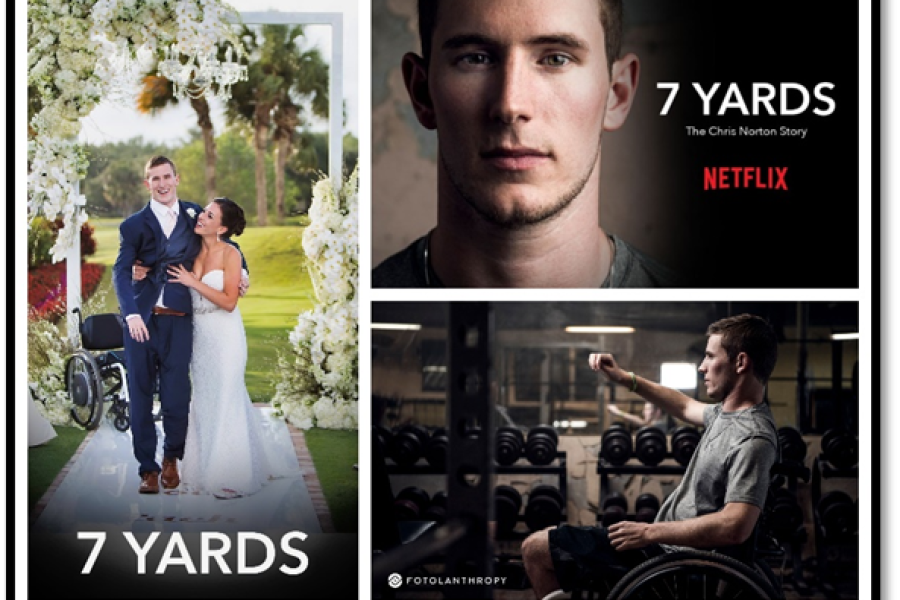 â€˜7 yards: The Chris Norton Storyâ€™ is a fascinating documentary about a former American college football player, who defied the odds, after a devastating accident.

In October 2010 at age only 18, Chris suffered a debilitating spinal cord injury during a college football game. Paralysed from the neck down, doctors gave him just a 3 percent chance to ever move again.

But he defied that diagnosis. After years of physical therapy and training, Chris' story went viral in 2015 when he successfully walked across the college graduation stage with the help of his fiancÃ©e Emily. Video of Chris walking to get his diploma touched the world and has received over 300 million views. Soon after, Chris and Emily set an ambitious new goal: walk seven yards side-by-side down their wedding aisle. This documentary follows Chris and Emily as they work towards that goal.

Set between the worst day of his life and the best day of his life, from the moment Chris was at his most vulnerable to the moment he was at his most inspirational, the film paints a heart-warming portrait of the man who would not give up, and his inspirational story. Itâ€™s a story about mental strength and how determination can mean the difference between getting your life back and being condemned to watch life pass you by.

And itâ€™s a story about and how much external support means to that recovery. Chrisâ€™s humility and determination inspired people to want to step up and work with him on his road to recovery. Not everyone can inspire such acts of love and friendship. Even a touch of anger plays its part, when at one point when a doctor coldly dismisses his efforts as aiming for an impossible goal.

Watching the film, you see just how many vital factors played a role in Chrisâ€™s recovery, and you begin to understand why 97% donâ€™t get there.

The documentary features powerful interviews, and emotional re-enactments, many of which Norton did himself. Most notably, he re-enacted the football tackle that changed his life. It also provides an intimate look at the Nortonâ€™s decision to become parents through foster care and adoption. The couple have had 18 foster placements, first fostering a 17-year-old in need when they were only 23 & 24 years old. They are now 28 & 29 and have adopted five children â€“ with a sixth adoption â€“ a little two-year-old boy, due to complete this month.

â€œWe donâ€™t get to control what happens to us, but we can choose how we respondâ€ says Chris, who is now an author, motivational speaker and founder of The Chris Norton Foundation which helps those with spinal cord and neuromuscular disabilities live better lives. â€œNo one ever volunteers to struggle, but it can be one of our greatest teachers. My story is hard, but it is full of hope, and I think that is relevant to everyone right now.â€