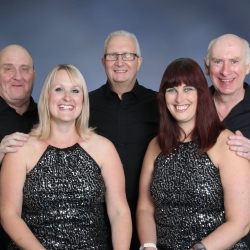 Band on the Run Essex

We are a versatile group who have been together since 1997 who are suitable for Weddings,Â Corporate

6-15 Piece party band based in London playing the finest blend of the 70s / 80s and hits of today.

Multi-Tribute Band to the legends of rock and pop over the past six decades.

Top UK showband featuring two female singers and covering material from the 60's through to the present...

Classique are a six piece high energy band covering classic songs from the 60s through to the pre...

Fairplay is one of the South West's top function bands known for professionalism, reliability and...

A party covers band, with two female vocalists. Pop, disco and jazz, from 1960's to the present day....

Fronted by two talented female vocalists, they have toured the world. They deliver a high energy show...

Vibrant & versatile covers band for all occasions; soul, funk, rock and pop from the 60s to current chart...

An explosive blend of soul & funk from this superb London-based 8-piece outfit, which includes both

Grand Avenue are a young, energetic group of experienced musicians and performers who have played at...

An excellent young band performing a wise range of great music from the last 50 years. They have a professional...

"Jamtastic are the most frequently recommended live music wedding entertainment and wedding band for...

One World are based in Surrey, and have performed extensively throughout the UK. They are an 8 - 10 piece...

This fantastic live band delivers over two hours of the funkiest hits from 60s soul & rock'n'roll...

The mesh band are the perfect function and wedding band for your party.

Band Factory will bring the party to your Wedding, Corporate Events and Functions. We tailor the entertainment...

Seattle have built up a great reputation as one of Scotland's best wedding bands.

Book fantastic DJ's & Bands For Hire from only Â£695 at the UK's Best Entertainment Agency.

Just Groove Live are one of the UK’s most talented function bands and include some of the UK's...

One of the UK's most sought after Live Cover Bands, with the Passion, Talent and Experience to ...

These 5 young, dynamic, professional musicians play every conceivable hit from the 60s to the present...

P2F are available for Weddings, Private Parties and Corporate Events. We cover a wide range of Hits from...

Hula Groove are an experienced function band based in London and the South East comprising of 4 beautiful...

Band on the Run Ltd Essex

Band on the Run is an extremely professional, versatile and lively 5 piece band

One of the UKs most popular party bands. Established in 2000. Fun, lively, experienced - perfect ..

Avalon are one of the most popular choices of function entertainment in the South-East of England...

The Redfords are a live five piece bespoke rock/pop band. Their sets are exciting and dynamic and...

Function Junction are an entertainment agency who specialise in wedding bands and function bands.

Professional wedding, party and corporate event band, guaranteed to have the audience dancing all ni

Chemistry is the perfect Party Band for weddings, birthdays, and company events

We couldn't have booked a better band for our wedding. The look was great, the sound incredible ...

Function Central is a leading band and DJ hire service, providing exceptional live music to over 3000...

The Kicks wedding and party band for hire - book them early to avoid disappointment!

SHE aka Sophisticated Hot Entertainment is one of the best live party bands based in London, UK.

6 piece function band performing music from the 60's to the present!

Highly experienced and professional band for all occasions - trio to 5 piece.

Festival, wedding and corporate party band from the South-west UK.

The Sweet & Lowdown Wedding Band The City of Brighton and Hove

World-class 6 or 7-piece band from Manchester who specialise in entertainment for parties & events.

Exciting new 5 piece function band, based in the south of Essex.

Bespoke live music from some of the UK's most talented musicians.

Xavier is a new exciting band to have hit the music scene in 2019!